26th May 2017, Kildare: Top Oil, Ireland’s leading family owned home heating and fuel business, has announced a new sponsorship agreement with Showjumping Ireland. Top Oil will sponsor the National Ladies Championship, which runs from May to September at showjumping venues across the country.

This year’s National Ladies Championship gets under way at the Midleton Show, Cork, on the 28th of May, followed by other key competitive events around Ireland throughout the summer. The final show will take place at Whites Cross Charity Show, Curraheen, Cork, on the 3rd of September.

Gerard Boylan, Group Chief Executive of Top Oil commented on the sponsorship: “Top Oil is proud to sponsor Showjumping Ireland’s Ladies Championship for 2017. As a leading Irish family owned home heating and fuel provider, we are committed to supporting local communities, and this partnership reflects that commitment. The development of both horses and athletes in a competitive arena is an important part of our heritage in Ireland and we are proud to be associated with Showjumping Ireland. We wish all the teams involved in competing this year the very best with the Championships.”

Michael Hennessy, Regional Chairman, Showjumping Ireland, said; “We are delighted to have such a well-known Irish brand coming on board to support the Ladies Championship this year. Top Oil is an established Irish brand and recognised as a partner of communities across Ireland, and so we are proud to have the support of Top Oil for the coming year.” 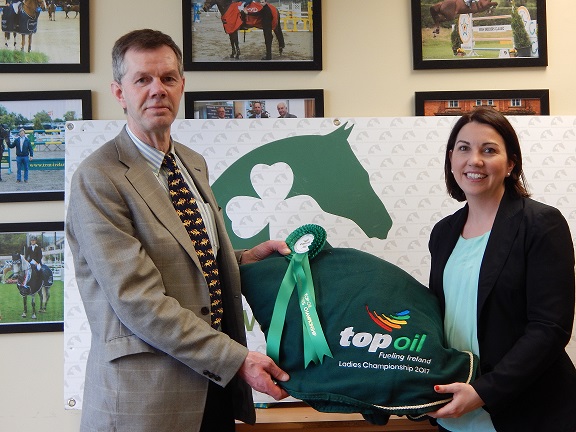 There are over 20 qualifiers throughout the summer for the National Ladies Championship, the venues and dates for each competition are listed below:

Top Oil has been serving the community for over 200 years with a nationwide network of service stations, motorway service areas, fuel card locations and home heating oil depots.